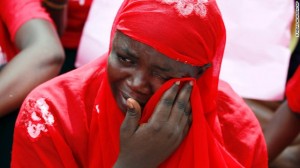 Last week, I was running on a trail when I got a call. Panting, I answered the phone. Jonathan, a Fox News producer needed me to comment on a story that was trending on Twitter. Boko Haram had kidnapped closed to 300 15-18 year old Nigerian Schoolgirls. Over 1 million re-tweets of the hashtag #BringBackOurGirls began a global outcry to find the girls.

I wrapped up my workout, showered, and got set up to comment. Last night the storyaired, but I can’t stop thinking about these girls. As a father of two girls (6 & 3) this whole thing sickens me. As the CEO of a social media agency the idea that social media may help these girls thrills me. The way the story came to me, and the way Fox (not my employer, I’m an unpaid expert commentator) sourced the story is compelling as well. Let me explain:

Ramaa Mosley, a Los Angeles director and mother of two, was driving in her car when she heard the news on the radio. Nearly 300 schoolgirls in Nigeria had been kidnapped by armed extremists.

I believe that we’re at a tipping point for mainstream media, and how they determine what is news. Social media is the true voice of the people. By kicking traditional media in the shin, and calling attention to a story that needs immediate attention, this could be the largest uprising by citizens since the Arab Spring.

In 2012 I wrote on about Joseph Kony on Social Media Today. Stating that the idea that a small documentary filmmaker could shed light on a warlord proved my manifesto which I put forth in my book that social media, while powered by technology is much of a spiritual awakening than a technological one. I believe that the global attention that this story proves my manifesto further.

When there is outrage, when there is emotion, when there are other human beings suffering, social media kicks in. We turn to the most frictionless manner in which we can communicate to the greatest number of like-minded people. This is a beautifully coordinated effort, and social media helps to facilitate the organization – we as human beings – can effect real change in the world.

Social media is the true voice of the people. Disrupting the normal mainstream media machine. Effectively flipping the news cycle, and dictating what the people what to learn more about, take part in, and shed light on.

By succeeding in turning the light to their cause – those who have coordinated#bringbackourgirls effort are changing the flow of information. This is true power to the people. There is truth here. There is emotion here, and therefore it resonates, and gains momentum. Decentralized citizen journalism allows for the highest quality stories to rise to the top of our collective conscience. No rich guys in the corner office deciding if this will air tonight on the 6 o’clock news. We’re telling them what the news really is. Wow. We don’t care about the tabloid drivel they try to feed us. We want to change the world for the better. We’re not the murderous heathens they depict us to be in order to get us to watch their channel. We care. We love. We hurt. We want to effect positive change in the world.

Step aside mainstream media – the people have spoken.

No matter what the outcome, one woman has single handedly and quickly raised the awareness of this crime. I pray it ends well.