A few weeks ago I was lucky enough to appear on Inside Edition to discuss social media.  Well – more specifically I was there to discuss the scandal associated with the newly revealed fact that Boo the Dog’s owner  is a Facebook employee. 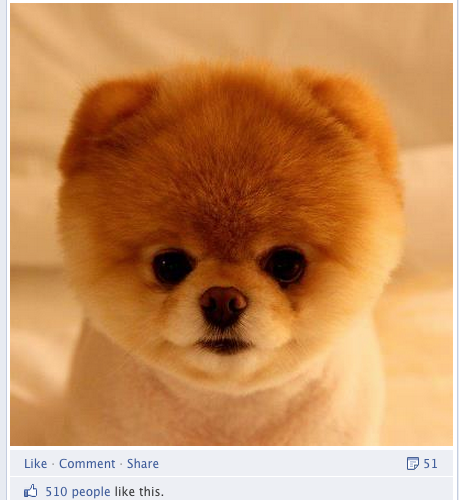 While this may not scream scandal at first blush – you should know that Boo the Dog has a Facebook page with millions of fans. So when Boo, the World’s Cutest Dog, Calls a Facebook Employee “Mom” the world wants to know the potentially scandalous implications – Did she leverage insider tactics to glean so many “likes” on her dog‘s Facebook page?  Could this be an inside job?  You get the drift.  Of course there was minimal scandal, lots of hype and all sorts of social media silliness.  Truism: cute dogs will always help to glean the attention in any story.

So there I was  – on national television commenting on the cutest dog in the world.  It was a great appearance for Silverback Social and frankly – it was fun.  I was excited to share the segment with the Silverback Social community. So I posted the link to the segment on our Facebook page.   In doing so I thought I would give this special appearance a bit of a push – so for the first time I decided to spend some extra money and promote the segment via Facebook’s new promoted posts.  For those of you that aren’t familiar with Promoted Posts – Facebook defines them as

“an easy way to reach more of the people who like your Page and their friends Visit your page to try promoting a post.”

So, before posting the scandalous television appearance I selected the option to “Get more people to see this post.” The idea here is that for the first time Facebook is allowing you to promote your content to an audience outside of just your current Facebook page likes.  I was excited.  I selected “People who like your page and their friends.”  I hit save and went about my business for the day.

The results were shocking.  Over the course of two days 510 people liked the post, 51 people shared the post and a myriad of people left comments – I was thrilled. That is until I took a closer look at who was doing the sharing, liking and commenting.  Approximately 90% of the comments were not in English – and those that did post in English some were posted in broken English – or no language at all “pgn atu ikh..ada gk” Ugh.   Upon further inspection and after a few more days –  I decided to review the final demographics of the activity on the post. Again – the results were shocking.   The post reached 17,064 people, had 1,106 page photos views, 510 page post likes, 89 link clicks, 51 page post shares, 4 new page likes, and 33 comments.  …wait for it – of the 23 people initially “talking about” the post the majority of those posts came from Cirebon, Jawa Barat, Indonesia.  INDONESIA!  Needless to say – I was not happy.  I hadn’t spend a ton of money on the promotion ($17), but I was let down.  Was Facebook shopping out their promoted posts to Indonesia? Could this be?  I began to think about why this had happened? Why would Facebook promote my post to people in Indonesia? So playing devils’ advocate I thought of a few reasons why this may have happened –

Content: Granted – the content of the post had to do with a cute fluffy dog.  So perhaps there’s a great audience in Indonesia for such silly posts.  I get it – this wasn’t my most polished Fox Business Television appearance – but still …

Demographics: The assumption here is that Facebook would have an algorithm that promotes the post to the same demographic of the current fans.  While this makes sense – it’s also a bit of a problem.  I spent a good amount of money to advertise my Facebook page and grow my following.   So if the demographic of my Facebook fans  represent individuals from Indonesia that means that I have fans that I don’t want on my page, and that were outside of the demographic parameters that I had put forth during the advertising campaign.   Looking at my demographics today I can see that Indonesia is in fact, the second most popular country to have liked my page after the USA – but did they like the page organically or while I was paying Facebook for advertising to grow my Facebook page likes?

Listen – I love Facebook – really, I do. I’m just bringing this issue to light because I’m bummed, and frankly baffled.  Why did this happen? Have you had a similar experience? Should I give Facebook’s promoted posts another shot? I know that they can work – as is evident from Amy Porterfield’s post “The 5 Myths of Facebook Promoted Posts” Did I do something wrong? Any and all feedback is welcomed.

Gain access to our social media evolution vault. Once registered receive e-books, PDF’s, cheat-sheet, tutorials, and more.
Social Media Is Happening to Your Brand (Whether You Like It or Not) 40 Lessons From 40 Years of Chris Dessi
Scroll to top