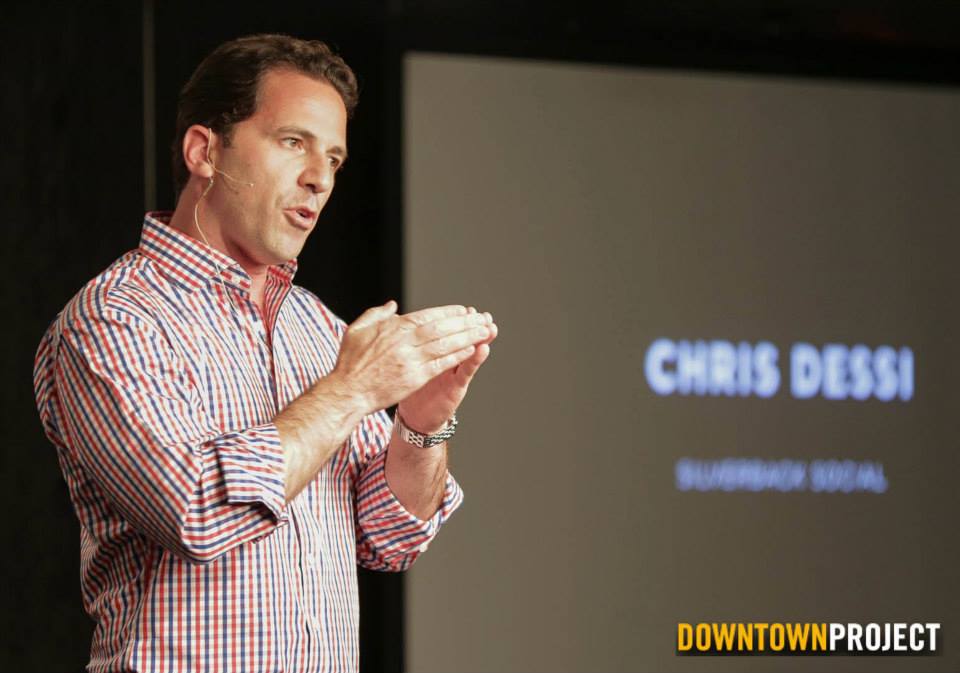 I don’t normally cry in public. But there I was, under the hot lights on a stage in Las Vegas speaking at Catalyst Week and I was crying. I felt a twinge of embarrassment, but I knew that I was in a safe place, and sharing like this was encouraged. I ended my talk, felt the warm applause wash over me, and I knew I had done the right thing. I’d just shared a very personal journey that led me to where I am today.

A few weeks prior to speaking at Catalyst Week I was perplexed. My company was co-curating the week, and I still wasn’t even 100% sure what we were getting ourselves, and our colleagues into.

All I knew is that I trusted the vision of Tony Hsieh. I had enjoyed reading his bookDelivering Happiness, and I was very impressed with the team at CatalystCreativ. I trusted them. When I inquired about Catalyst Week to my colleagues who had been there, I kept hearing the same thing:

“You have to experience it.”

Ugh. All I wanted was some sort of idea about what I had committing to. But I understood that this one time, for this to work I had to let go of preconceived notions. I committed to letting go, and letting it all happen. I’m thrilled I did.

Back in November of 2012, while promoting our inaugural Westchester Digital Summit, one of my star employees, Josh Fenster stumbled across Catalyst Week. We then connected with Amanda Slavin the CEO of CatalystCreativ. She found out about our summit, and we discussed that we were interested in possibly producing a Las Vegas Digital Summit. So she asked if we would be interested in co-curating a weeklong event in Downtown Las Vegas. She explained that CatalystCreativ is

… a community design firm that builds community for cities, brands and movements through educational and inspirational events”

We discussed the Downtown Project and she explained that it’s

…a group of passionate people committed to helping to transform Downtown Las Vegas into the most community-focused large city in the world.”

I was fascinated, and thrilled to be a part of something bigger than Silverback Social. This was our chance to give back, learn, and network on a deeper level than ever. We were in. But truth be told, it was a tough sell to get our network to attend. I mean, how do you explain that you’ll be the guest of a visionary billionaire who is revitalizing a forgotten part of the United States in the most unusual and compelling way?

You can’t explain it. You can only share what an experience like this has done to you. This isn’t a normal experience.

Nope, not normal at all. Odd in fact.

The oddest experience I’ve ever had in my career.

But let me be clear – odd is a good thing. Odd doesn’t happen enough. Oddballs are rampant in the halls of Zappos, throughout the Downtown project and certainly at CatalystCreativ, and that’s a gloriously good thing. Silverback Social is oddball central! The oddballs are welcomed there, and I dig it big time. Glorious, lovable, intelligent, engaging, and fascinating oddballs like Caleb Edison (pictured below) who gave us our tour of the Downtown Project and spoke of the initiative’s three Cs:

He also pointed out that the Downtown initiative has unintentionally taken the shape of a Llama (Tony Hsieh’s favorite animal, because…well, they’re awesome). Odd.

Odd stories like how Tony gave restaurateur Natalie Young her initial investment to launch her downtown restaurant called Eat. Her story is odd in the most random, and inspiring way. Hearing her story in the video below may inspire others to open restaurants in Downtown Las Vegas. That would be the true ROI of the Downtown Project. A true Ripple Of Impact..

Odd encounters like colliding with John Guydon of The Lassy Project in the pool at the Ogden who explained to my CMO John Zanzarella and I that he is changing the way the world will prevent child abductions. We’ve been encouraging everyone we meet to download the APP. It will save children’s lives. Imagine the first child’s life that’s saved because of this technology. That would be the true ROI of the Downtown Project and Catalyst Week. A true Ripple Of Impact.

Odd and magical stories like the one told during a Catalyst Week workshop given by Leisa Peterson of Wealthclinic. Leisa shared her moment of clarity about her life that came to her during a random shooting. Powerful, and odd, and glorious. I re-told Leisa’s story to friends over dinner this past weekend. I was encouraging our friend to take the plunge into becoming an entrepreneur. Imagine if she does because of Leisa’s story? That would be the true ROI of the Downtown Project and Catalyst Week. A true Ripple OfImpact.

Odd bursts of mutual admiration for colleagues. Like when Robyn C. Allen organized other Catalyst attendees in an effort to offer a small gift at our closing dinner to the CatalystCreativ team. Which triggered a series of heart-felt thank yous, and applause. Like the speech Katie Vander Ark gave in honor of her boss Amanda Slavin. Public praise and admiration of colleagues? Passing that along to others, bringing a deeper level of humanity to our work? That is the true ROI of the Downtown Project, and Catalyst Week. A true Ripple Of Impact.

The week has influenced the way I view my business, the way I interact with my wife, and the life I lead at home and in the office. I’m typing this now and I’m welling up with the joy of knowing I’ve made friends I’ll have for life, and that my network will be better with these people in it.

True change is elusive. Bureaucracy slows it. Indifference is the fuel of stagnation. While the Downtown Project may not be perfect, and may not be for everyone, there is m-u-c-hmore positive than negative happening in a place that was previously left for dead. American cities need more Catalyst Weeks. Our world needs more renegades like Tony and more people who dive headlong into the fray like Amanda Slavin and her team at CatalystCreativ.

I encourage you to learn more about the CatalystCreativ Team (Amanda, Danielle, Robert, Mike, Katie, Cindy, Reyna, and Nicole). Keep up with CatalystCreativ on Twitter, Instagram (@catalystcreativ) or on Facebook.

Have you been to a Catalyst Week or Creativ Week yet? The Ripple Of Impact will be felt for years to come, and I’ll do everything in my power to help along the way.

3 Ways to Kill It at Your Next Public Speaking Gig: What I Learned from Chris Dessi at Merit Direct’s 2013 Co-Op
3 Ways Heineken USA’s Newcastle Brand Wins in Social Media
Social Media Nirvana Equals Gary Vaynerchuk, Vayner Media, Silverback Social & Panera Cinnamon Buns
Facebook Introducing Embedded Posts
3 Steps to Taking Control of Your Life
Creating Your Own Business Playbook: How Networking Equates to Opportunity
Three Reasons Why the Analysts Got it Wrong with Twitter Stock
What Do You Think Facebook is Announcing Today?
0 replies

Gain access to our social media evolution vault. Once registered receive e-books, PDF’s, cheat-sheet, tutorials, and more.
Social Media Is Happening to Your Brand (Whether You Like It or Not) 40 Lessons From 40 Years of Chris Dessi
Scroll to top